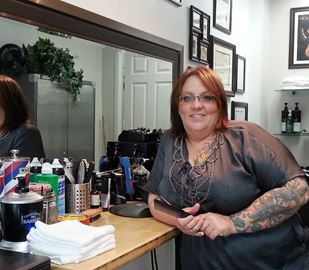 Erica Gyldenbjerg runs The Twisted Barber in Carleton Place, located at 122 Bridge St. She opened her shop in April 2016. Photo by Tara Gesner

The barber shop owned by Erica Gyldenbjerg is one twisted place. Gyldenbjerg runs The Twisted Barber in Carleton Place, located at 122 Bridge St. She opened her shop in April 2016, almost five months after moving to town.

Why the Twisted Barber?

“Plus, the barber pole and the old safety razors twist,” she added. “It’s a little bit of everything.”

Gyldenbjerg grew up in Smithville, in the Niagara area; however, she spent a good number of years living and working in Ottawa. “I love my profession, especially the interaction with people,” she said. “I also get great joy out of making people feel better about themselves.” 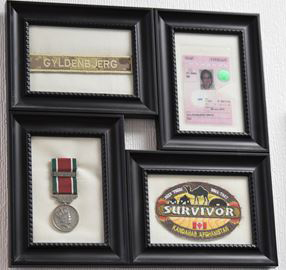 In June 2008, Erica Gyldenbjerg of The Twisted Barber began a six-month civilian contract with the Canadian Armed Forces as a barber. She was posted at Kandahar Airfield in Afghanistan. Hanging on the wall of the shop is a picture frame containing her General Service Medal, identification card and flak jacket patches. Photo by Tara Gesner

In June 2008, Gyldenbjerg began a six-month civilian contract with the Canadian Armed Forces as a barber. She was posted at Kandahar Airfield in Afghanistan. “Working for years at a private barber shop in Ottawa, in the area of New Edinburgh and Rockcliffe, I had a lot of military clientele,” she said. “One day a customer brought in an advertisement and told me I should apply.” Gyldenbjerg was separated at the time with two teenage children. “I just felt I needed to give back,” she explained, “and I wanted to bring a little bit of home to our guys over there…”

Afghanistan in 2008 was very active, with rocket assaults happening all the time. “Although I was prepped for these types of attacks before I went over, the first one really freaked me out,” Gyldenbjerg said. Knowing how weird it may sound to the average person, “it became the norm after that,” she added. The time between 7 and 9 p.m. was known as Happy Hour – the period when rocket attacks were most common. “You always had to have your flak jacket with you during this time,” Gyldenbjerg said. A flak jacket is a form of body armour. It protects against bullets and shrapnel. Her first month in Afghanistan, Gyldenbjerg badly twisted her ankle, but she kept working for the remainder of her contract. “It happened at night, when I was walking back to my tent after working,” she said. “I went over on a rock.” Months later, the injury would come back to haunt Gyldenbjerg.

At Kandahar Airfield, three barbers, including Gyldenbjerg worked seven days a week, 10 to 12 hours a day. “We were always busy,” she said, “and we were only cutting hair.” Straight razor shaves were not permitted for hygiene reasons. “On a slow day we would do 100 haircuts, both military and civilian personnel,” Gyldenbjerg said, “and a busy day would be 150 to 170 haircuts.” “Ramp ceremony days, when they would be sending a body home, were really difficult,” she continued. “Everyone would come in beforehand for a haircut…you’d hear them talking about what happened.” One-hundred and fifty-eight Canadian Armed Forces members lost their lives in service while participating in our country’s military efforts in Afghanistan.

Gyldenbjerg came home from Afghanistan in December 2008. Is it something she would do again? “Absolutely!” she said. “I came back with a different outlook on life.” “You tend not to sweat the small stuff,” the barber continued. “If you wake up, it’s a good day.”

Once home from Afghanistan, Gyldenbjerg ended up needing three surgeries to fix her foot. As a result, she took a three-year hiatus. After this period, “I really needed to be smart about my life,” she said, “so I went back to school and took a dental assistant course.” Even though Gyldenbjerg ended up with a job as a dental receptionist, she wasn’t happy. “This dental career was not for me,” she said, “and I moved home to the Niagara area.”

In June 2013, Gyldenbjerg opened up a barber shop in Niagara Falls. “I was there for awhile, and I really enjoyed it; however, my daughter, living in Vankleek Hill, had my first grandchild, and my boyfriend was living in Carleton Place,” she said. 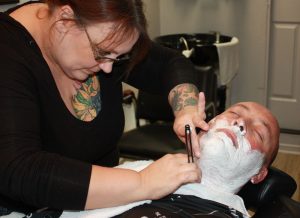 Erica Gyldenbjerg giving BIA Board of Directors’ Member, Sean Lawrence, a shave with the straight razor. Photo by Sherry Crummy

Gyldenbjerg moved to Carleton Place in December 2015, “and if I started up a barber shop once, I could do it again.” She wanted The Twisted Barber to be in the downtown area, and she wanted a humble space that she could afford, with little overhead while she built her clientele. “I know lots of people joke about the number of hair salons and barber shops in the downtown area…but being around other businesses isn’t a negative, it’s a positive,” Gyldenbjerg said.

The Twisted Barber is open Monday to Friday from 10 a.m. to 8 p.m. and Saturday from 8 a.m. to 4 p.m. Sundays are spent with her boyfriend. “We go for walks, do yard work and visit the grandkids,” Gyldenbjerg said. “I now have two.”

Services at The Twisted Barber include haircuts for men and boys, beard trims and hot towel straight razor shaves. “An adult haircut is $15,” Gyldenbjerg said. “It’s not a lot, but I want it to be accessible for everyone to have a quality haircut.” A military discount is offered everyday. “I love my boys in uniform,” the barber said with a laugh.

Hanging on the wall of The Twisted Barber is a picture frame containing Gyldenbjerg’s General Service Medal, identification card and flak jacket patches. 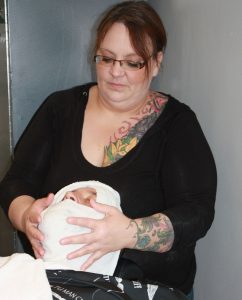 Many warm towels used before the straight razor. Photo by Sherry Crummy

Gyldenbjerg is also interested in becoming more involved in the Carleton Place community, including joining the board of the local Business Improvement Association. She has already donated haircuts to Carleton Place Cruise Nights as door prizes, in an effort to raise money for the Carleton Place & District Memorial Hospital. What’s more, her services were offered to the Canadian Career Academy, providing a complimentary haircut to men who were going for an interview.

“I also donated some haircuts to Lanark County Interval House, for the young boys who are staying there with their moms,” Gyldenbjerg said. “Even as a newcomer, people need to look out for the community they live in, helping out wherever they can,” she added.

For more information about The Twisted Barber or to make an appointment, call 613-266-0037.  Or visit her Facebook page at www.facebook.com/theTwistedBarber