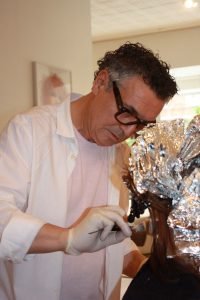 The name of one of the newest businesses to open in downtown Carleton Place offers a clue: “Giardino Lifestyle Salon & Academy” certainly promises more than a quick trim. The bio and credentials of its owner, master stylist Nick Giardino, offer more. Born in Rocca San Giovanni, Italy, Nick began apprenticing in his aunt’s salon at age 14, and his route to Canada involved training in England under Sassoon and Sanrizz, as well as styling, teaching and platform work all over the U.S. and Europe. International magazines feature his work on their covers, and the posters on his walls are all photos of his own creations (in fact, he even discovered a few of the models pictured there). 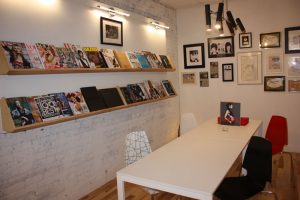 A library at the rear of the salon is stocked with magazines like German and British Vogue, as well as books on photography, great restaurants, and the history of fashion.

But the biggest indication that something special is happening comes from Nick’s plans for his new business. Although not a styling school, with the “Academy” part of this new salon Nick intends to offer hairdressers and apprentices the opportunity to share ideas and learn advanced colouring and cutting techniques through soirées. He plans to bring guest artists to these events, including experts in the fields of fashion and make-up as well as hairdressing. A library at the rear of the salon is stocked with magazines like German and British Vogue, as well as books on photography, great restaurants, and the history of fashion.

Future plans also include the launch of a line of make-up that Nick is developing with his sister Lucia (who has worked for MAC Cosmetics, and done the make-up for the imagery that is featured in the salon). Nick also designs clothing, and anticipates eventually bringing in a line of separates and made-to-measure suits.
In the meantime, you can also drop in and grab a cup of Nespresso coffee, which is available to salon clients and walk-ins (Nick will also retail the machines beginning in the fall, and can order coffee for home use).

In the interest of becoming more involved in the community, he is even in the process of putting in a front patio on Bridge Street, where you will be able to enjoy a coffee and a specially-made biscotti or chocolate croissant. 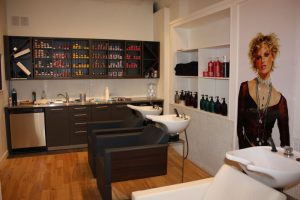 Coffee and couture notwithstanding, Giardino Lifestyle Salon & Academy is first and foremost a hair salon, and as such they offer services such as haircuts and colours for men, women and children.

It’s worth your while to peruse their informative website, to become acquainted with Nick’s palette of colour services, which includes such menu items as The Illuminator (“a few judicious touches of shimmering, glimmering, face-framing colour around the front sections of your hair”) and The Bronzer (“this wash of warm colour is tailor-made for your skin tone to give a gentle, sun-kissed glow to your complexion, no holiday required”). The salon also carries several well-curated hard-to-find product lines like Bumble and Bumble and Oribe. 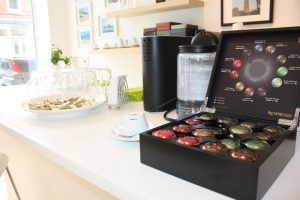 In recent years Nick has worked in Stittsville, and then in Holt Renfrew on Bloor Street in Toronto. When asked why he chose to locate his new salon in downtown Carleton Place, he responded that: “the mission of our salon and lifestyle store is to make our location in Carleton Place a destination point in the Ottawa Valley area.” Another determining factor was the availability of the gorgeous building at 129 Bridge Street that most recently housed Valley Granite and Tile (although Humm readers may remember it as the home of Brush Strokes). It was actually one of Nick’s Stittsville clients — who followed him to Toronto when he was at Holt Renfrew — who mentioned that the space was becoming available back in February of this year.
So far Nick has been very pleased with his reception to the town.

They can be reached at 492–6000, and you can find out more at www.giardinolifestyle.com